March 2012 Jenny is off judging at the International Alpaca Odyssey

Jenny is away from the farm yet again, this time she has been invited to judge in California for their International Alpaca Odyssey.

Congratulations to all involved for putting on a great display of alpacas.

She has managed to fit in a bit of sight seeing and horse back riding up into the mountains, such a hard life! 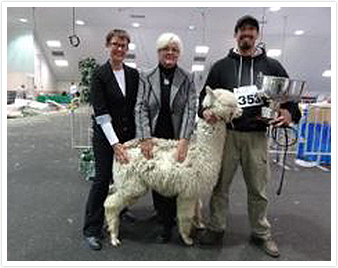 Banksia Park had a very successful show at Tammworth, being awarded 4 Championship Ribbons and 2 Reserve Championships.

December 2009 Jenny Jackson and Jenny McAuliffe head of on their travels across the Nullabor yet again..

During Challenger’s time he was awarded many trophies, just one of these and probably his greatest achievment,

Supreme Champion at the 2008 Whiteman Park at 10 years of age, has been buried with him.
Challenger has certainly left his stamp on the Australian Alpaca Industry.

You will be missed. Rest in peace old friend. xx 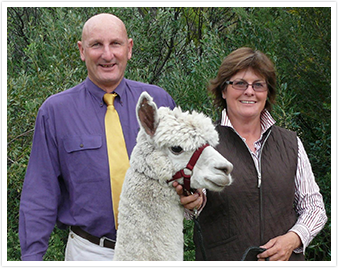 All went smoothly during the infomation day with a good turn out of 48 people. Demonstrations, powerpoint presentations and hands on experiance covered many various areas such as handling, fleece and animal judging, husbandry, selecting breeding stock..etc.

On the Sunday, there was approx 15 people scattered through out the day interested in inspecting the sale stock. Many thanks to the new owners of the 19 alpacas (and 2 donkeys) sold as a result of the weekend.

Thank you to all who helped in the set up for the weekend and all who participated.

Jenny travelled to Canberra to judge at the Australian National Show for the third time.

Sophie competed in the AAA National Junior Judging Competition representing Western Australia and won the title “Champian Junior Judge”. Special thanks to Jenny Mcauliffe, Sue Leith and Carolyn Emery for all of their help with practice & preparation.

A quality group of animals was presented to the Ballarat Show.

While a number of the Banksia Park show team were competing in the East at the Bendigo & Ballarat Shows a strong team was presented to this Inaugural Winter Show and won a total of 9 broad ribbons.

A small quality show team competed at the Bendigo Sheep Show this year being awarded a number of ribbons and Banksia Park QK Nando taking out the Champion Junior Male title.

The highlight of this show was the awarding of the progeny class to Banksia Park Khan ET amongst a number of other ribbon winners.

Another strong showing at the 10th Anniversary of the Whiteman Park Show.

It was great to meet old friends at the Conference and an honour to win the Senior Fleece & Light Fawn Fleece Awards at the International Fleece Competition.

Pictured here is Carolyn Jinks awarding Jenny with one of the Championships. 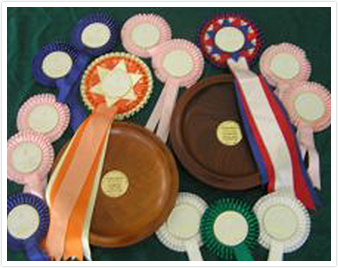 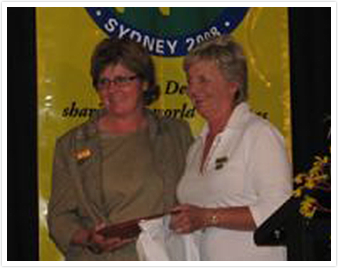 Another strong showing at the 10th Anniversary of the Whiteman Park Show. 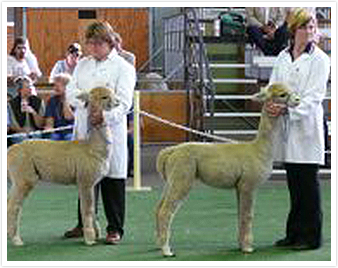 A number of other Banksia Park animals performed very strongly as did the entire Western Australian contingent at the Show. 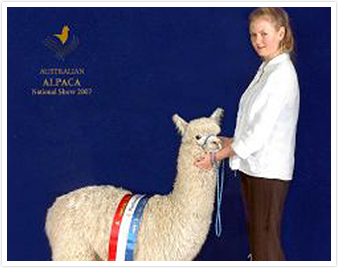 The successful process of collection and transfer of embryos at Banksia Park was confirmed by the ultrasound scanning of recipient females at greater than 60 days pregnant. This is proof that the in-house application of embryo transfer technology has been successful.

Paul & Sally are world leaders in embryo transfer in alpacas and llamas and have been keen researchers along with Alejandra into the possible freezing of alpaca embryo. Their visit to Banksia Park allowed an opportunity for training and sharing of experiences.

First ET offspring from an ET female have arrived!

Jenny and George Jackson from Banksia Park alpaca stud in Western Australia have had an historic win for their Stud and the alpaca industry by being joint winners of the prestigious Governors Cup at the 2006 Perth Royal Show.

The Governors Cup has been competed for at Perth Royal Shows since 1896. The object of the award is to encourage exhibitors to compete with the highest quality pedigree breeding exhibits and reward both excellence and consistency throughout the whole range of their exhibits. Points can be gained for first, second and third prize winners from all single pen classes, excluding group and special classes. Points are not awarded for Championship or Reserve Championship wins.

All up, Banksia Park won 9 first places, 6 seconds, 5 third placings, 4 Championships and 3 Reserve Championships in the Huacaya section of the 2006 Perth Royal Show.

In the Governors Cup only the most successful 10 single pen entries for each exhibitor contribute to the calculation and it is believed that Banksia Park would have accumulated 37 points from the best 10 of their 20 placings in the various classes.

It is unfortunate that due to a clerical error in calculating the results from the various livestock sections, the win by Banksia Park was not discovered until a post audit of the points. The cup was initially awarded to cattle farmers Loreen and Tony Kitchen of Bandeeka stud, Elgin but they will now share the honour with Jenny and George Jackson. The error denied Jenny and George the honour of participating in the Governors Cup award presentation which is the highlight of the Grand Parade on the final day of the Royal Show.

Telephone advice of their win was received late at night by Jenny and her husband Dr George Jackson while in New Zealand on a show judging visit. Their excitement at winning such a prestigous event was put on hold for a few hours though. Their good friend and fellow alpaca breeder, Geoff Fysh, is notorious for his practical jokes and they waited until they could ring the Royal Agriculture Society office in Perth the next morning and confirm their success before letting family and friends know about their win.

In her acceptance speech at a special award presentation arranged at the Royal Show grounds, Jenny acknowledged that it would probably have been easy for the Show Society to not correct the error. But they had done so and she was pleased to accept the award on behalf of herself and her family.

Banksia Park was established in 1992 with the initial importing of a few Peruvian alpacas. They have since gone on to establish a herd in of excess of 700 alpacas and are among the most successful alpaca breeders in Australia. They are major participants in the growing Embryo Transplant (ET) side of the alpaca industry with their ET progeny being sought after throughout Australia and New Zealand. One of their males Banksia Park Khan was supreme champion at the 2005 National Show and was later sold for an Australian record price of $170,000 at the National Auction. Another of their ET progeny, Banksia Park Miss Penelope won Champion Junior Female at the 2006 National Show and sold for $64,000 at the following day s National Auction.

Banksia Park Khan ET wins the 2005 National Show and is sold to a syndicate from Western Australia for A$170,000. An Australian Record price for sales at the National Auction & Sale. 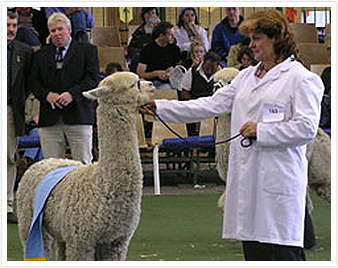